Royal Caribbean (NYSE:RCL) has really ugly numbers right now, because of the coronavirus. In its most recent quarter, revenue growth went backwards 94% year over year. And we know why the numbers are bad — cruise ship bookings have been decimated around the world because of government lockdowns.

My investment thesis is that this is about to change. Here’s why I think the cruise lines will reopen for business sooner rather than later, and why investors might want to buy shares of Royal Caribbean now. 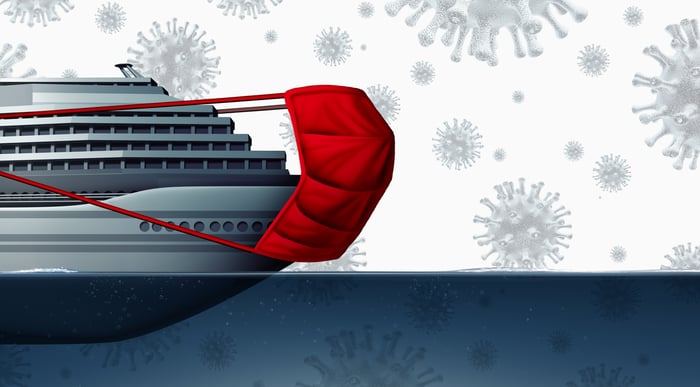 It’s an election year in the U.S.

In the recent presidential debates, the coronavirus — and the U.S. response to it — was a major topic. One of the parties is more inclined to reopen for business, and the other party is more inclined to keep businesses shut down for health reasons. It’s quite natural for this worldwide health scare to become politicized in an election year. What will happen once the election is over?

My belief is that we will see a shift in political sentiment. And this shift will happen regardless of who wins the election. We will see more positive news about the coronavirus vaccines and how well they are working. Several pharmaceutical companies are now in phase 3 trials, and there is reason for optimism.

In addition, we will see more positive news about COVID-19 diagnostics and how reliable they are. Royal Caribbean has already announced that all passengers and crew will be tested for the coronavirus. The company wants to “make our ships and environment a bubble” and safer than staying at home.

Royal Caribbean has private islands, which may allow it to open before other cruise lines. And we are already starting to see places reopen for tourism around the world. Some of these places include Aruba, Brazil, Costa Rica, Cuba, Maldives, Mexico, Morocco, Panama, Puerto Rico, Saint Barts, and the islands of Turks and Caicos. Destinations that have reopened for travel with partial quarantine restrictions include Barbados, Curacao, Dominica, Jamaica, Saint Vincent and the Grenadines, and the U.S. Virgin Islands.

For many smaller countries, tourism is a major part of their economy. The U.S. can shut down its tourism industry and still thrive as a society. Other countries do not have that luxury. And I believe there will be a “domino effect.” As more and more countries reopen for tourism, the more likely it will be that the cruise industry will be allowed to reopen in the U.S.

Royal Caribbean’s stock has been flying since March

Royal Caribbean’s stock price dropped to a startling $19 a share on March 18. That was the point of maximum negativity. It’s been on an absolute tear since then, with the price hitting $72 on Sept. 4 and $70 on Oct. 12.

For investors who bought in March, you’ve already tripled your money. Of course, people who bought at the beginning of the year are still sitting on massive losses, as the stock is down almost 60% for 2020. So Royal Caribbean has been a great investment for you, or a bad investment for you, depending upon when you bought your shares and what you paid for them.

Indeed, the stock has rebounded so much, the company decided to take some cash out. A couple of weeks ago, Royal Caribbean had a secondary stock offering, as well as a debt offering. The company added another billion dollars to its bank account. The stock took a minor hit on the news.

While many people see a secondary offering as negative, since the company is selling its own shares, to me it indicates savvy management. The market has a lot of confidence that Royal Caribbean will rebound. (That’s why the stock has tripled since March.) Management has used this bullishness to raise cash, which makes the company’s finances stronger. So while a secondary offering is bad news for the stock in the near term (the share price dropped to $58 when we bought in), it’s good news for the actual company.

Many years ago, my family took a cruise on Explorer of the Seas. It was so much fun. We did parasailing and rock climbing and gambled in the casino and lay out on the beaches. Cruise ships are awesome. We’re biased toward Royal Caribbean because that’s the cruise we took.

I’ve never bought shares in Royal Caribbean, because its revenue growth was slow and steady. I’ve always preferred high-growth stocks, like Software-as-a-Service companies, or biotechs with an exciting new drug. But the coronavirus shutdown has changed my calculation.

Royal Caribbean’s revenue growth is about to escalate significantly. Right now the company is like a biotech start-up waiting for the green light. Royal Caribbean is waiting for the federal government to allow it to start providing its service to the public (again). The good news for investors is that we know what kind of business we can expect the company to do once it receives this green light.

While the share price will certainly be volatile in the short term, my firm belief is that in 2021 the cruise lines will be sailing again. Even if I’m over-optimistic, Royal Caribbean has deep reservoirs of cash, over $4 billion. And the company has over $11 billion in credit facilities it can access as well. To my mind, it’s not a question of whether the stock will recover, but when.