SLOW RECOVERY:
Thailand has begun offering a visa to people from low-risk nations, so China Airlines is also planning eight round-trip flights per week from next month

EVA and CAL, Taiwan’s two largest carriers, have continued to operate flights between Taiwan Taoyuan International Airport and Suvarnabhumi Airport in Bangkok during the COVID-19 pandemic, although they have not entirely been passenger flights.

As the Thai government banned the entry of international tourists from April, flights from Taipei to Bangkok operated by the two carriers have only contained cargo, while passengers in Bangkok could board flights returning to Taipei. 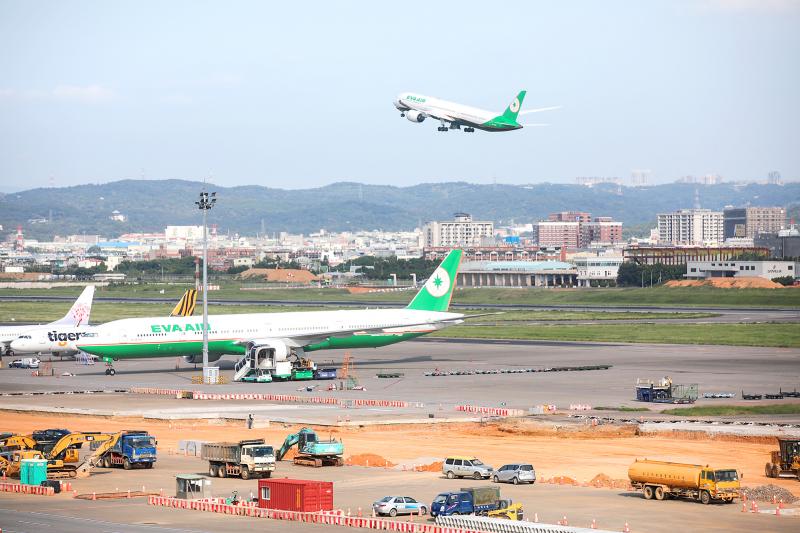 Now that Thailand has begun to ease its travel restrictions, EVA yesterday began to resume two round-trip flights per week between Taipei and Bangkok, while CAL plans to operate eight such flights next month and nine such flights in December, the two airlines said.

The airlines have not set a fixed schedule for the flights, as their times and dates would be adjusted depending on the pandemic situation, they said.

Thailand allows entry to its citizens and residents, although a measure introduced early this month allows foreign nationals from countries deemed to be low-risk to apply to travel to Thailand under a “Special Tourist Visa.”

Separately, Japan’s ANA Holdings Inc plans to cut about 3,500 jobs by fiscal year 2022, and temporarily transfer employees to Toyota Motor Corp and other automakers, Yomiuri Shimbun reported, without saying where it got the information.

The Japanese carrier would announce a business plan tomorrow that includes the cutbacks and a halt to hiring to slash labor costs, which account for about 30 percent of the company’s fixed expenses, the newspaper reported.

The global airline industry is facing a painfully slow recovery from the effects of the pandemic.

ANA is expecting a record full-year loss of about ￥530 billion (US$5.06 billion), the Kyodo news agency reported earlier.

The company plans to acquire about US$3.8 billion in subordinated loans from five lenders.

ANA would sell about 30 wide-body aircraft because of their low fuel efficiency and high maintenance costs, the Yomiuri reported.

It would also utilize its customer data to offer financial and other services, while arranging code-sharing with its budget carrier, Peach Aviation Ltd, the report said.

In fiscal year 2021, the company would cut about ￥80 billion in costs, the paper said.

Comments will be moderated. Keep comments relevant to the article. Remarks containing abusive and obscene language, personal attacks of any kind or promotion will be removed and the user banned. Final decision will be at the discretion of the Taipei Times.