DUBAI (AFP) — If you had asked Israeli businessman Yehonatan Ben Hamozeg earlier this year where he’d be pitching his palm tree saving technology in October, there was no chance he would have said the United Arab Emirates.

But after a surprise US-backed normalization agreement between the UAE and Israel, the soft-spoken, grey-haired entrepreneur found himself doing just that in a Dubai hotel last week.

Ben Hamozeg is the founder and chief executive of Agrint, a company that uses seismic sensors to detect insects that eat — and destroy — palm trees from the inside.

He was one of the 13 business leaders who joined a four-day trip to the UAE organized by Jerusalem Venture Partners (JVP), a venture capitalist firm.

Before normalization, there had been discreet links between the Gulf nation and Israel’s flourishing high-tech sector. 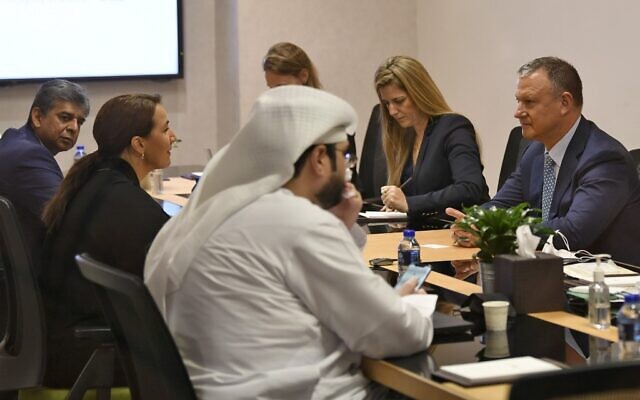 In this photo taken on October 27, 2020, Emirati Minister of State for Food and Water Security Mariam al-Muhairi (L) meets with Erel Margalit, founder and chairman of Jerusalem Venture Partners (JVP), at the headquarters of the Government Accelerators in Dubai (Karim SAHIB / AFP)

But after the deal brokered by US President Donald Trump, who is seeking re-election on Tuesday, those links have come to the surface and are poised to expand.

Charismatic and gregarious, Margalit is one of Israel’s top venture capitalists, having backed more than 150 technology start-ups.

He insisted the UAE’s potential for Israel’s economy is vast, both in terms of direct partnerships in the financial, tech and food sectors, but also as a portal to Arab markets still cut off from the Jewish state.

“Israel can now work with the region rather than being closed to it. For us, it’s a huge opportunity,” he said.

“We want to use this breakthrough to start a new chapter in the region.” 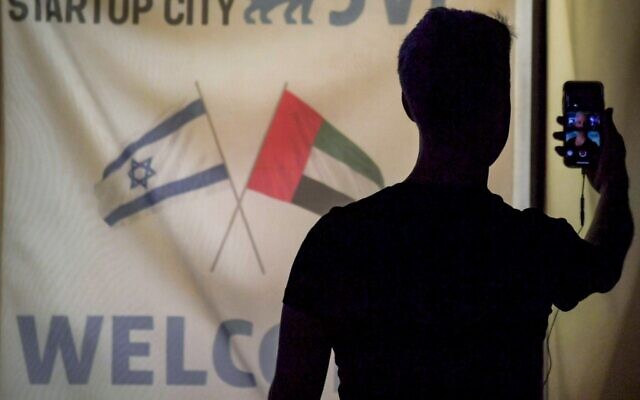 A member of an Israeli tech delegation uses his phone in a video call during an evening meeting with Emirati counterparts at a hotel in Dubai on October 25, 2020. (Karim SAHIB / AFP)

‘Out of the shadows’

With the shroud of secrecy over UAE-Israeli business ties lifted, the delegation, counting several Israeli and foreign reporters, arrived in Dubai by private jet and was welcomed with kosher food and Hebrew signs.

A Palestinian businessman from East Jerusalem, a former Mossad spymaster turned businessman, and a desert crop expert — three men who worked with the UAE for years — traveled alongside the 13 CEOs, and were key players in setting up the meetings.

The group was mixed openly with Emirati business leaders and government officials at a posh hotel in Dubai’s financial district and across the city. 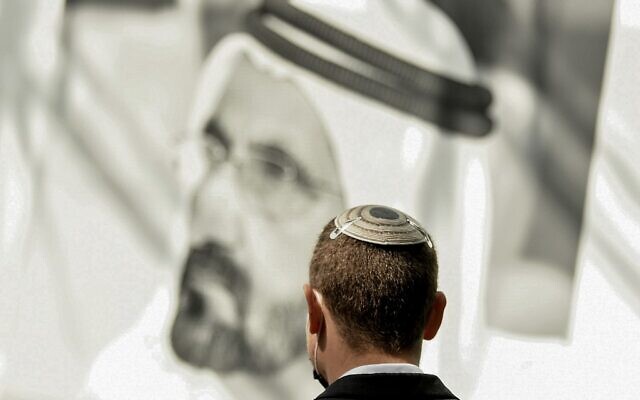 In this photo taken on October 27, 2020, A member of Israeli high-tech delegation stands in front of a poster of Dubai’s ruler Sheikh Mohammed bin Rashid al-Maktoum during a meeting with Emirati counterparts at the headquarters of the Government Accelerators in Dubai. (Karim SAHIB / AFP)

Alongside networking events — some complicated by coronavirus restrictions — the delegates held private meetings with potential partners, with sight-seeing sprinkled between events.

“If I bring a Dutch company and tell them hummus, they’d say – what the hell is this,” Mandeel, who wore the traditional white Emirati robe, said using the Arabic word for chickpeas.

Israeli firms, he said, could make strong partners because they understand the Middle East, including the quest for food security in an often challenging agricultural environment.

They could also be a bridge to peace between the nations.

“I always believe that the economy will drive politics,” he said. “So you move the economy and things will come after positively.”

Before normalization, Israeli Ronen Yehoshua was already doing business in Dubai, but his Morphisec cyber-security firm was represented by a third party.

Now it can “move out of the shadows into the light,” he said. 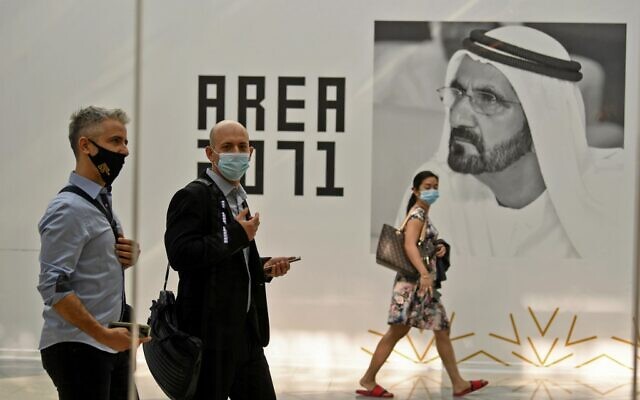 In this photo taken on October 27, 2020, Members of Israeli high-tech delegation walk past a poster of Dubai’s ruler Sheikh Mohammed bin Rashid al-Maktoum during a meeting with Emirati counterparts at the headquarters of the Government Accelerators in Dubai. (Karim SAHIB / AFP)

For him, being in the UAE also meant he could finally discover the local market.

“Only when you reach a place can you really get a better and deeper understanding of it,” he said.

Arshi Ayub Zaveri, chief executive of the Dubai-based Trust with Trade, said blockchain technology developed by “the wonderful minds that are in Israel” marked an attractive opportunity.

“At the end of the day we’ve been the traditional asset owners, oil, or any other commodities. We’d like to see how we can tokenize that digitally on a proper format,” she said.

“I’m hopeful that we see a time where it becomes normal for us to list each other’s companies on our exchanges,” said Zaveri, also an advisory to the royal family.

While Margalit’s delegation was seeking business partners, he stressed that private sector deals were a proven method of solidifying peace among nations.
En route to Dubai, he told the delegation: “You are Israel’s true emissaries.”

“I respect the politicians for leading a process and making a peace deal,” he said. “Now we need to bring the content.”

InnovoPro chief executive Taly Nechushtan, whose product had caught the attention of the Emirati Mandeel, said her powder, which can be used to make foods including ice cream and vegan burgers, was attractive in a world “looking for alternatives.”

Opening a UAE plant could provide the domestic market a sustainable protein, but also the opportunity to become a regional “production portal,” she said.

While Nechushtan’s whirlwind visit was packed with meetings, she said it was premature to talk about deals.

“We came here to make friends; business will follow,” she said. “We’re not worried.”