During its latest earnings call, Delta Air Lines (DAL) said it burned through $24 million of cash daily during the quarter and that figure was coming down to $18 million in September and by the end of the year it should be at $10 million per day. So, while Delta will continue bleeding cash, I do think they are on a good trajectory and what helps the company is their cost-conscious approach to the business that they had before the pandemic. 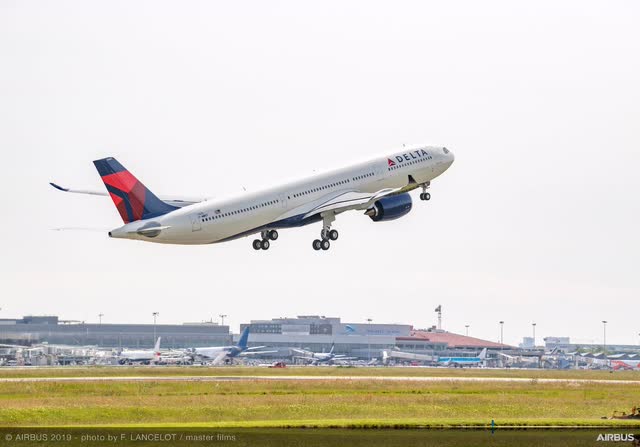 One of the ways the company can significantly reduce its cash outflow is by altering its near-term purchasing commitments. In this analysis, we have a look at how big of a lever this is for Delta Air Lines.

By December 31st, 2019, Delta Air Lines expected to accept delivery of around 250 aircraft. Notable was that the delivery profile was heavily front loaded with 80% of the deliveries expected through 2022. Now, with the pandemic obviously there is no need for many of those jets anymore. Delta Air Lines has not provided any delivery schedule as it provides such schedule only at the end of a fiscal year.

The airline did, however, provide a dollar value breakdown valuing the aircraft purchase commitments at $14.2B. Using the Airbus backlog visualizer that we have developed for subscribers of The Aerospace Forum, we found a value of $14.3B for the Airbus backlog. So, our estimated value was around 0.2% higher or $30 million where our estimate did not account for the CRJ-900 deliveries. Incorporating those in the value stream, that would bring our estimate to $14.215B versus the $14.230B disclosed. So there is a $15 million difference between the estimates but you could say that with the difference being around 0.1%, the values almost completely match.

Actual market values of aircraft are considered proprietary, but it’s important to note that this $14.23B figure is not a figure out of thin air. 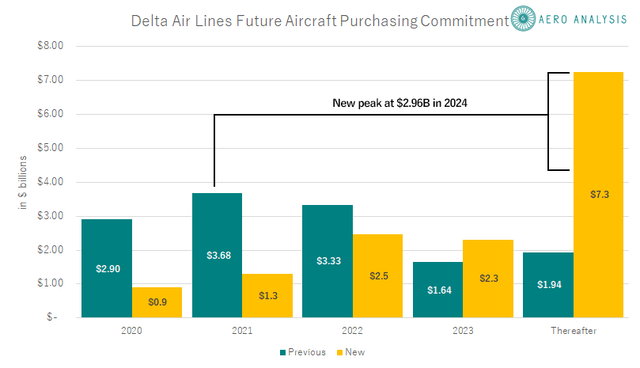 Interesting to note is that while previously the profile was front loaded, with almost 80% of the units and 75% of the aircraft purchasing commitment value to be rendered in the coming 3 years, that now has fallen to 33% as the near-term combination of supporting growth and fleet renewal has evaporated. Whereas aircraft purchasing commitments were expected to peak at $3.7B in 2021, we now see that the peak has shifted to 2024, but this peak value is 25% lower than the previously expected peak. The market is expected to have recovered by 2024, so in that sense the peak shift does fit.

The peak itself is not a direct reflection of actual expenditure as pre-delivery payments often start roughly two years before the actual delivery takes place. So the dollar values should be visualized as delivery value but not directly as a direct unaltered reflection of cash commitments. Currently, the big question is which aircraft will see the biggest deferrals. One would be inclined to say that the wide body aircraft that are first to be deferred. For 2020, there were 4 more Airbus A330-900neo and 2 more Airbus A350-900 deliveries scheduled.

Currently all Airbus A350-900s and all but one of the Airbus A330-900s are in service but that unlikely will be reflective of strong demand warranting a final delivery payment for the Airbus A330-900s and Airbus A350s awaiting delivery. At the moment, there are 6 Boeing 777s in service with Delta that will be phased out in less than two weeks. While these aircraft are currently still in service, they will still be removed and with that in mind it somewhat would have made sense to take deliveries of other Airbus A350s but we’ve recently also observed frequencies for the Airbus A350 to come down and flight resumption to Cape Town being delayed. So, it still makes a lot of sense to defer those deliveries.

Shaving the A321 deliveries off, would trim $1.3B in aircraft purchase commitment value with another $600 million shaved off from deferring wide body deliveries and $100 million for the CRJ-900 deferral while 10-15 deferrals are expected for the Airbus A220 program adding $350 million to $550 million in deferral value. That would total to $2.2B-$2.55B in delivery value reduction this year and could save up to $1.5B in final delivery payment. Obviously at this point, being able to save that kind of money is significant and that is also what helps Delta Air Lines lower the cash bleeding.

In the new plan, the compounded lower projected aircraft purchasing commitments will peak in 2022 and that does make sense, because Delta continues to reduce its fleet by slashing some Airbus A320ceos, the Boeing 767 and Boeing 717 and while that is a longer-term process, the airline should not just focus on cutting down its fleet, because it will make it harder for the airline to compete in a market recovery. That is what I believe is reflected in the 2021 purchase commitments in which most notably the Airbus A321neo acquired for growth and wide body deliveries would remain absent for the mix with a bigger focus on fleet replacement and simplification.

Next to fleet simplification, the reduced commitments beyond 2020 also mean that Delta will have reduced progress payment commitments. Payments for aircraft can start 2 years in advance, that means that for aircraft to be delivered in 2022, pre-delivery payments have already started. By deferring future year deliveries, Delta Air Lines not only reduces the required final delivery payments in those years but also reduces the delivery payments. It is likely that there will be a penalty connected to deferring, but at this stage and given how many aircraft Delta Air Lines has on order it probably will be well worth to accept the penalty and stretch deliveries to alleviate near-term cash commitments and streamline the delivery plan to meet market demand.

I believe the current renewed delivery schedules, while not detailed by type, primarily show that Delta Air Lines will be accepting less aircraft in the coming years as the growth element has completely vanished. That would likely significantly reduce the deliveries of the Airbus A321neo of which Delta initially planned to take over 80 aircraft in 2021-2022 and with a slower international recovery expected there also could be some hesitance to take additional Airbus A330-900s and Airbus A350-900s.

As a big customer, Delta Air Lines has a $14B lever that it can use to reduce the cash burn. However, the carrier should also carefully execute on deferrals as a mismatch in deferrals and retirements in combination with a sudden revival of demand could significantly hurt Delta’s market position. That is a risk that should be highlighted, though I believe that Delta Air Lines has shown itself extremely capable in recent years to execute on costs and the company’s aircraft acquisition strategy and evaluation is a clear example of that.

*Join The Aerospace Forum today and get a 35% discount*

The Aerospace Forum is the most subscribed-to service focusing on investments in the aerospace sphere, but we also share our holdings and trades outside of the aerospace industry. As a member, you will receive high-grade analysis to gain better understanding of the industry and make more rewarding investment decisions.

Disclosure: I am/we are long EADSF. I wrote this article myself, and it expresses my own opinions. I am not receiving compensation for it (other than from Seeking Alpha). I have no business relationship with any company whose stock is mentioned in this article.