The prize for the travel category of Monster Children magazine’s annual photo contest is $5,000 and your shot at a temp job. But it’s nice work if you can get it.

The magazine has teamed up with booze brand Hochstadter’s Slow & Low Rock and Rye to create a convoluted reward for whomever takes the best wanderlust evoking shot, we first spied in Travel & Leisure.

“The U.S.-based winner will receive a two-week contract position as the whiskey brand’s chief of discovery, exploring key destinations in the brand’s ‘Whiskey Van’ — a 1978 Chevy G20 that’s been fully customized with a walnut bar, leather bench seating, orange tufted paneling, and sound system, making it ideal for a road trip,” the magazine reported.

After meeting with the company’s marketing team in California, the briefly-appointed chief of discovery will embark on a two

It’s no secret that the stars love to vacation at some of the most glamorous places in the world, but where do they turn when they want to step out of the spotlight and into relaxation?

British Columbia’s Okanagan Valley has quickly become one of Canada’s best-kept secrets. Thanks to its lush landscapes, breathtaking views and world class food and wine scene, the Okanagan is a safe haven for celebrities looking to unwind and enjoy the best that Canada has to offer.

Tucked away near Kelowna, B.C. lays the crown jewel of Canadian wine-making, Mission Hill Family Estate Winery – a must-visit when in the Okanagan Valley. Not only is Mission Hill home to sprawling on-site vineyards and timeless architecture, but its restaurant, The Terrace Restaurant at Mission Hill, was ranked top five in the world by Travel + Leisure magazine. To this day, Mission Hill is the only winery

Lockdown in 2020 has led to a resurgence of home-based hobbies such as gardening, home decorating, TV watching and home cooking.

While 2020 has undeniably been a year we’re all keen to put behind us, there have been many positive roll-on effects that have changed the way we live.

The return to higher alert levels was a good reminder of what we did — and didn’t — like about the first lockdown, and reinforced how changes to our lifestyles could improve our lives for the better.

More time at home has led to a resurgence of home-based hobbies such as gardening, home decorating, TV watching and home cooking, and that’s where the award-winning magazine titles at Stuff have come into their own.

We’ve had more time and the space to focus on aspects of our homes that we want to change, resulting in an increase in the revamp and This has certainly been a year of great impacts on food supply chains. When we first discussed a Food Safety Insights article about supply chain issues, the focus of the article was intended to review supply chain management and control, supplier verification, the Foreign Supplier Verification Program, and similar topics.

As with most every subject these days, however, what we heard in our survey and interviews was dominated by concerns brought on by the impact of coronavirus disease (COVID-19). The short-term impacts are being felt in every area of food processing, but the longer-term impacts are just now beginning to be examined and understood. How are processors coping with the shortages and supply chain disruptions they are facing today, and what are

Brace yourself, but there are only 56 days until Hanukkah is here, 71 days to Christmas and 72 days to Kwanzaa. And while the holidays this year may be hard to envision, the owners of Soul Taco are making sure to keep the spirit of the season alive. Starting in early November and running through Jan. 1, the trio will launch Jingle Belle, a dine-in and takeout pop-up celebrating a variety of holiday traditions. (Richmond magazine)

Mike Lindsey and Kimberly Love-Lindsey first met in restaurants, and after assisting one of biggest restaurant groups in the city with a slew of openings, the husband-and-wife team are flying solo. Combining flavors of the South with West African influences, Lillie Pearl not only pays homage to Lindsey’s grandmother, it will also mark a new addition to the few Black-owned fine-dining restaurants in the region. (Richmond magazine)

The Independent Photographer, an international network of photography enthusiasts and photographers, has announced the 10 winners of its Travel Photographer contest with a collection of images “capturing life in its most vivid forms” in various corners of the world.

MORE FROM FORBESThe Best Photos Of Wildlife From Above: Stunning Winners Of Drone Awards 2020By Cecilia Rodriguez

The winning photos, according to the organizers, “communicate the life of a place in all its splendor, whatever the subject from Street, Portrait, Landscape or Documentary.”

The image above by photographer Sandra Morante entitled ‘Kushti wrestlers at sunset’ and taken at Guru Jasram Ji Akhara Gym in New Delhi, India, was the winner of the $1,000 First Prize.

The ancient art of Indian wrestling, known as ‘kushti,’ still thrives in wrestling gyms. known as ‘Akharas,’ and are

Frequent flyers will have to do without amenities like blankets, pillows and hot meals on some flights to and from China for the foreseeable future, as several airlines have removed the niceties over coronavirus contagion concerns.

China Airlines, Mandarin Airlines and Cathay Pacific Airways have all cracked down amid the ongoing outbreak, which has killed at least 170 people and sickened 7,711 others as of Thursday morning.

On Monday night, China Airlines and its subsidiary Mandarin Airlines eliminated hot foods, blankets, pillows, towels, magazines and newspapers on Hong Kong and cross-strait flights. The carriers also replaced linens with paper towels and will only supply drinks and disposable

Cathy, a successful Etsy merchant who prefers to use just her first name, has never been to Charleston. She would very much like to visit the city, though. She’s heard the downtown streets are beautiful.

While Cathy is based in Miami, she knows plenty of women who’ve taken Charleston trips. They’ve bought shirts from her to commemorate them.

To come up with the most in-demand combinations, Cathy pokes around online.

“Basically, I get information from Google,” she says.

Her own sales also function as market research. And she’s noticed a few Southern cities stand out for their popularity with small groups of travelling pals.

“I sell a lot of Nashville shirts,

Khagendra “KG” Gurung is no stranger to the restaurant industry. Between all of his local family members, they own nine restaurants in Colorado — an impressive number given the competitive nature of the industry here. That’s why opening a restaurant amid a global pandemic didn’t cause too much stress for Gurung and at the beginning of October, he opened Mazevo — a healthy Mediterranean restaurant on Tennyson Street. 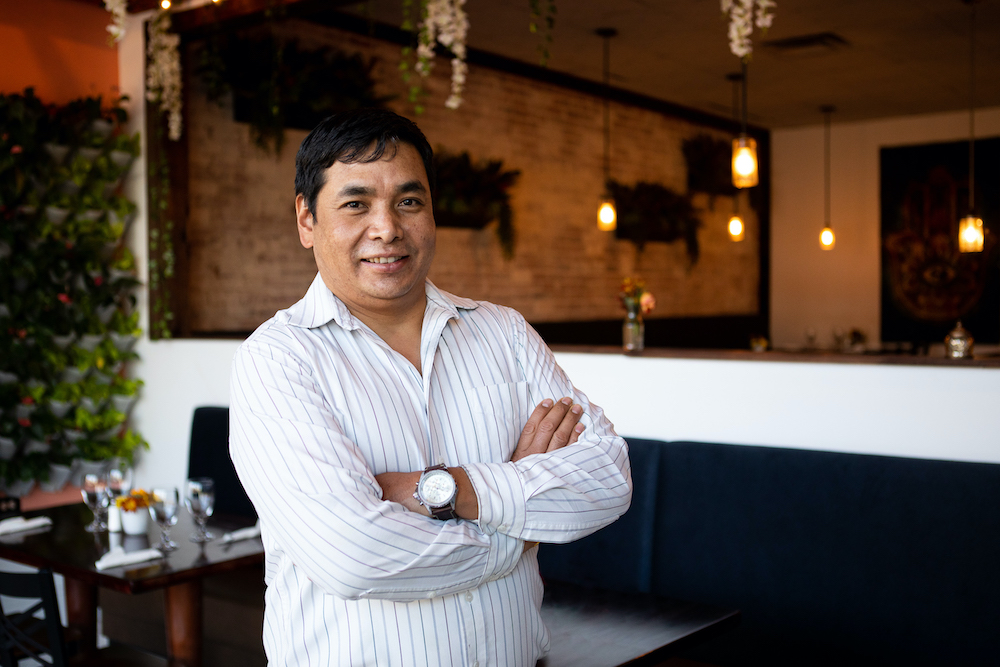 Gurung acquired the building on Tennyson Street earlier this year and decided on Mediterranean cuisine after doing market research in the neighborhood. “We want people to have a healthy option down here,” said Gurung. His other restaurants include Himchuli in the Highland neighborhood and Cuisine of the Himalayas in Evergreen — both Indian and Nepali cuisine. Gurung’s goal with Mazevo is to fill a need for healthy food as well as bring a Mediterranean option to the area that isn’t fast-casual like

To help the kids of St. Jude, customers can add a donation to their orders—on the phone, in stores or online. In addition to adding a whole dollar donation, customers can choose to round up their order total to donate the change to St. Jude.

“Franchise and corporate team members in stores across the country are looking forward to dedicating the rest of the year to raising funds for the kids at St. Jude Children’s Research Hospital,” says Ritch Allison, Domino’s CEO. “We are thrilled to join forces with our customers to support this incredible organization in the fight against childhood cancer.”

In September, Domino’s announced its