Cruise Lines International Association, which represents 95% of the cruise industry, introduced mandatory requirements to be able to set sail again.

Carnival Corp.’s AIDA Cruises, the cruise giant’s second line to restart operations in Europe, has announced it will once again suspend operations temporarily and cancel cruises for the month of November amid the COVID-19 pandemic that is seeing a surge in Europe, where the German line is based.

“As a result of Germany implementing far-reaching measures to contain the coronavirus pandemic, AIDA Cruises today announced it will temporarily pause its cruises for November, cancelling all voyages planned between Oct. 31 and Nov. 30,” AIDA said in a release provided by Roger Frizzell, spokesperson for Carnival Corp.

Since its restart on Oct. 17, no known cases of COVID-19 have emerged among passengers or crew on board, who are tested before embarking. “I don’t believe there were any positive tests prior to boarding that resulted in a denied boarding,” Frizzell told USA TODAY Thursday. 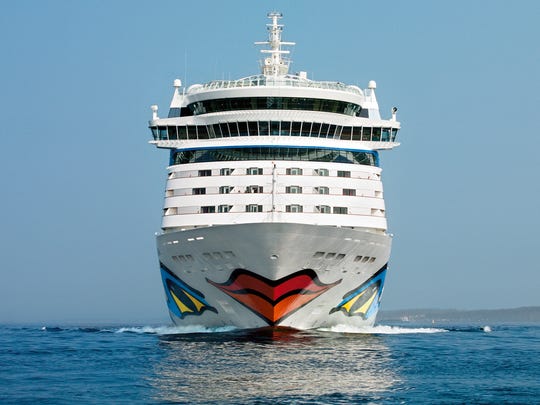 Other Aida ships with the giant, colorful lips include AIDAbella, which debuted in 2008. On some Aida ships, the lips take up more than 1,600 square feet of space. (Photo: Aida Cruises)

The cruise line’s announcement is aligned with the government of Germany’s decision to add more restrictions on public life and travel to reduce the spread of COVID-19 on Wednesday. A decision that “AIDA Cruises fully supports.”

Germany’s disease control agency said a record 14,964 new cases were recorded in the past 24 hours, bringing the country’s total infections to 449,275 since the beginning of the outbreak. Germany’s total COVID-related deaths stands at about 10,000, the Robert Koch Institute said.

While AIDA was sailing on seven day itineraries departing from Italy — not Germany — its passengers are primarily coming from Germany, hence the cancellations.

“(German guests) are now unable to fly into Italy for the cruise,” Frizzell said.

AIDA’s sister line, Costa Cruises, which has also been sailing in Italy and had a cluster of COVID-19 cases emerge on board, does not plan to stop sailing, Frizzell said.

That said, the cruise line issued a schedule update on Wednesday, canceling some upcoming sailings. The adjustments come “considering the limitations still in place in some European countries, and in light of the current epidemiological situation,” according to a news release.

Changes to Costa’s schedule include:

Cruise ships worldwide: With more than 250 people will test all passengers, crew for COVID-19