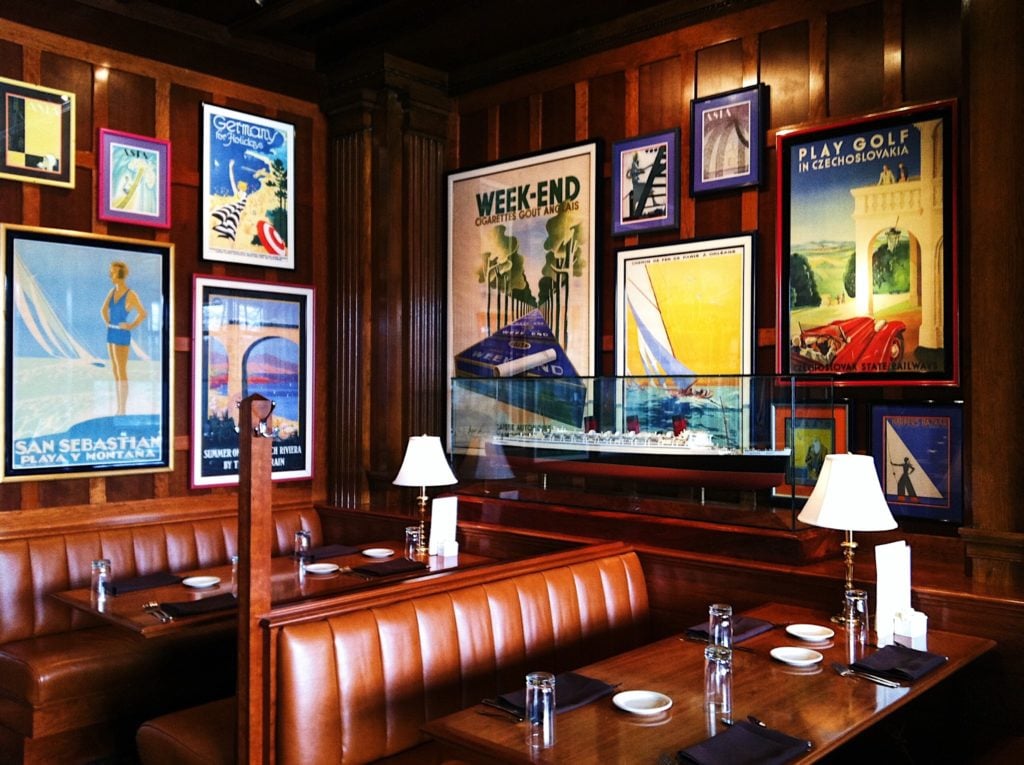 A&D – The Shaw bar was a no-frills spot for affordable cocktails, canned beers, and foosball over its eight years.

Acqua al Due – You now have to travel to the Florence original to get your filet mignon with blueberry sauce and gnocchi sampler.

America Eats Tavern – José Andrés’s ode to American cuisine—a concept that has opened and closed in multiple locations around DC since 2011—called it quits in Georgetown.

Amsterdam Falafelshop – The hangover-helping late-night standby on 14th Street is no more, but the Adams Morgan original remains open.

Bareburger – The omnivorous burger chain, which offered bison and plant-based patties alongside traditional beef, pulled out of DC with the shutter of its Dupont Circle location.

Bistro Bohem – This Shaw cafe served a Czech and European menu for eight years in Shaw.

Boundary Stone – The Bloomingdale hangout hopes to bring its wings and burgers back next year.

Breadline – The popular downtown bakery and sandwich destination is closed “for the foreseeable future.”

The Brixton – The tri-level U Street pub from Eric and Ian Hilton was a popular rooftop destination.

Cafe Chocolat – The chocolate boutique and coffee bar—the “Cheers of Chocolate”—was devoted to all things cacao over its nearly four years.

Cafe Soleil – This 12-year-old downtown staple was popular with office workers and tourists near the White House.

Capitol Lounge – The Capitol Hill bar was a go-to happy hour, sports, and trivia spot for politicos and Hill interns over its 26 years.

The Carving Room – The sandwich spot/bar  in Mount Vernon Triangle is suspended for now; the NoMa location is still open.

The Coconut Club – Adam Greenberg’s island-themed dining room near Union Market is on hiatus through the winter.

Coppi’s – The Italian restaurant, which boasted an “organic, biodynamic, sustainable” menu, had been around 27 years, including the last six in Cleveland Park. The owners hope to reopen elsewhere.

DC Eagle  – The District’s oldest continuously operating gay bar closed after the building it rented was sold. It was slated to celebrate its 49th anniversary this year.

Declaration – The pizza hangouts near the 9:30 Club and Nats Park are taking a break.

Dio Wine Bar – The progressive H Street wine bar-turned-bottle shop specialized in natural and women-made wines. It ceased operations in June with an eye toward potentially reopening down the line.

Eighteenth Street Lounge – One of DC’s iconic bars and nightclubs—a fixture of the then-vibrant Dupont nightlife scene in the ’90s and early 2000s—was about to celebrate its 25th anniversary.

Emilie’s– What was once one of DC’s hottest dining spots has morphed into Paraiso, a taqueria.

Fado – The Chinatown Irish bar had a 22 year run of serving Guinness and hosting World Cup watch parties. The owners say they closed because they weren’t able to renew their lease, not because of Covid.

Firehook Bakery – The bakery’s Cleveland Park location was a fixture of the neighborhood for 23 years.

Gibson – The cocktail haven at 14th and U helped introduce DC to the “speakeasy” style bar.

Hazel – The Neighborhood Restaurant Group’s eclectic Shaw dining room has shut down for the winter.

Johnny’s Half Shell – Ann Cashion and John Fulchino’s mid-Atlantic/Southern institution had been around in various locations since 1999.

Marvin – The 13-year-old U Street bistro and bar was a go-to for dancing, DJs, and live music.

Mason Dixie – After a long series of pop-ups and short-lived stint as a drive-through, this Southern biscuit specialist moved to Shaw and opened an all-day cafe and diner. You can still find the frozen biscuits in national retail outfits.

Matchbox – The 14th Street outpost of the local chain closed after Matchbox Food Group filed for bankruptcy in early August.

Momofuku CCDC – Celeb chef David Chang initially made his foray into Washington with a menu of ramen and bun, but reinvented the CityCenterDC restaurant to much acclaim under chef Tae Strain (who left last fall).

Nocturne – The intimate bar offered innovative cocktails in the basement of Sugar Shack in Shaw.

Olivia – Ashok Bajaj’s mod-Med dining room is one of many closures in Penn Quarter.

The Oval Room – Ashok Bajaj’s mod-American dining room near the White House is out of the power-lunch rotation.

Players Club – The two-year-old subterranean arcade bar in Logan Circle was styled after a 1970s rumpus room with classic games like pinball, Skee-Ball, and Pac Man.

Post Pub – The downtown dive served martinis and beer pitchers to journalists and other devoted regulars for nearly 44 years.

Rebellion – The 18th Street bourbon bar and restaurant aimed to be the “everyday public house” with a menu of Southern-inspired comfort food and whiskey galore.

Room 11 – The cozy Columbia Heights bar is (hopefully) only closed through the winter.

Roy Boys – The Navy Yard location of the fried-chicken/cocktail spot is gone, but its Shaw sibling is still in business.

Seventh Hill – The pizzeria from the owners of next-door Montmartre was a Capitol Hill destination for its thin-crust pies, which were named after DC parks and neighborhoods.

The Source – Wolfgang Puck’s modern Asian restaurant in the former Newseum building drew accolades for its dim sum and Peking duck. It transitioned to a more casual all-day menu earlier this year.

Sundevich – The Georgetown branch of this international-themed sandwich shop closed on Halloween. The Shaw shop remains, and a Capitol Hill location is in the works.

Tino’s Pizzeria – The family-run Cleveland Park spot had barely been open a year.

Tosca – The Italian fine-dining stalwart, a downtown favorite among lobbyists and politicos, is going on hiatus for the winter.

Wisdom – The gin-focused Hill bar closed in March, and will not reopen.

Clyde’s of Columbia – The Clyde’s Restaurant Group destination, which closed July 19, had been a fixture along Lake Kittamaqundi since 1975. The Soundry, a neighboring concert venue that opened in 2018, also closed.

George’s Chophouse – The Bethesda restaurant, previously 4935 Bar & Kitchen, converted into a steakhouse named after the owner’s late brother in 2018.

Gumbo Ya Ya – The Rockville Town Center restaurant, which moved from Germantown last year, served a hybrid of Puerto Rican and Cajun cuisines.

Jaleo Bethesda – It’s not all bad news: Jose Andres’s ThinkFoodGroup will open an offshoot of its New York restaurant, Spanish Diner, in its place.

La Tasca – The Kensington-headquartered tapas chain, which had locations in Rockville and Alexandria, filed for bankruptcy in May.

Passionfish– The glittery Bethesda dining room is now gone, though you can still get a seafood and sushi fix at the Reston location.

Sergio – The 37 year-old Italian restaurant in Silver Spring closed in March, and will not reopen.

Urban Bar-B-Q – The barbecue joint specialized in junk-food concoctions like “redneck nachos” and brisket egg rolls alongside the traditional ribs and pulled pork at its original Rockville location of 17 years. A handful of other Maryland locations remain open.

Pendleton Carryout – The tiny Old Town takeout place featured a rotating roster of pop-up businesses, but always served an excellent slice of Roman pizza. In its place: Chewish Deli, which has already opened.

Pizzeria Paradiso – Ruth Gresser’s decade-old Neapolitan pizzeria in Old Town closed when the pandemic began, and isn’t coming back. Her other locations are staying open.

Summers – The 38-year-old sports bar and soccer pub was one of Arlington’s oldest watering holes.

This post will continue to be updated. Send information about further closures to [email protected]

Anna Spiegel covers the dining and drinking scene in her native DC. Prior to joining Washingtonian in 2010, she attended the French Culinary Institute and Columbia University’s MFA program in New York, and held various cooking and writing positions in NYC and in St. John, US Virgin Islands.

Jessica Sidman covers the people and trends behind D.C.’s food and drink scene. Before joining Washingtonian in July 2016, she was Food Editor and Young & Hungry columnist at Washington City Paper. She is a Colorado native and University of Pennsylvania grad.

Ann Limpert joined Washingtonian in late 2003. She was previously an editorial assistant at Entertainment Weekly and a cook in New York restaurant kitchens, and she is a graduate of the Institute of Culinary Education. She lives in Logan Circle.