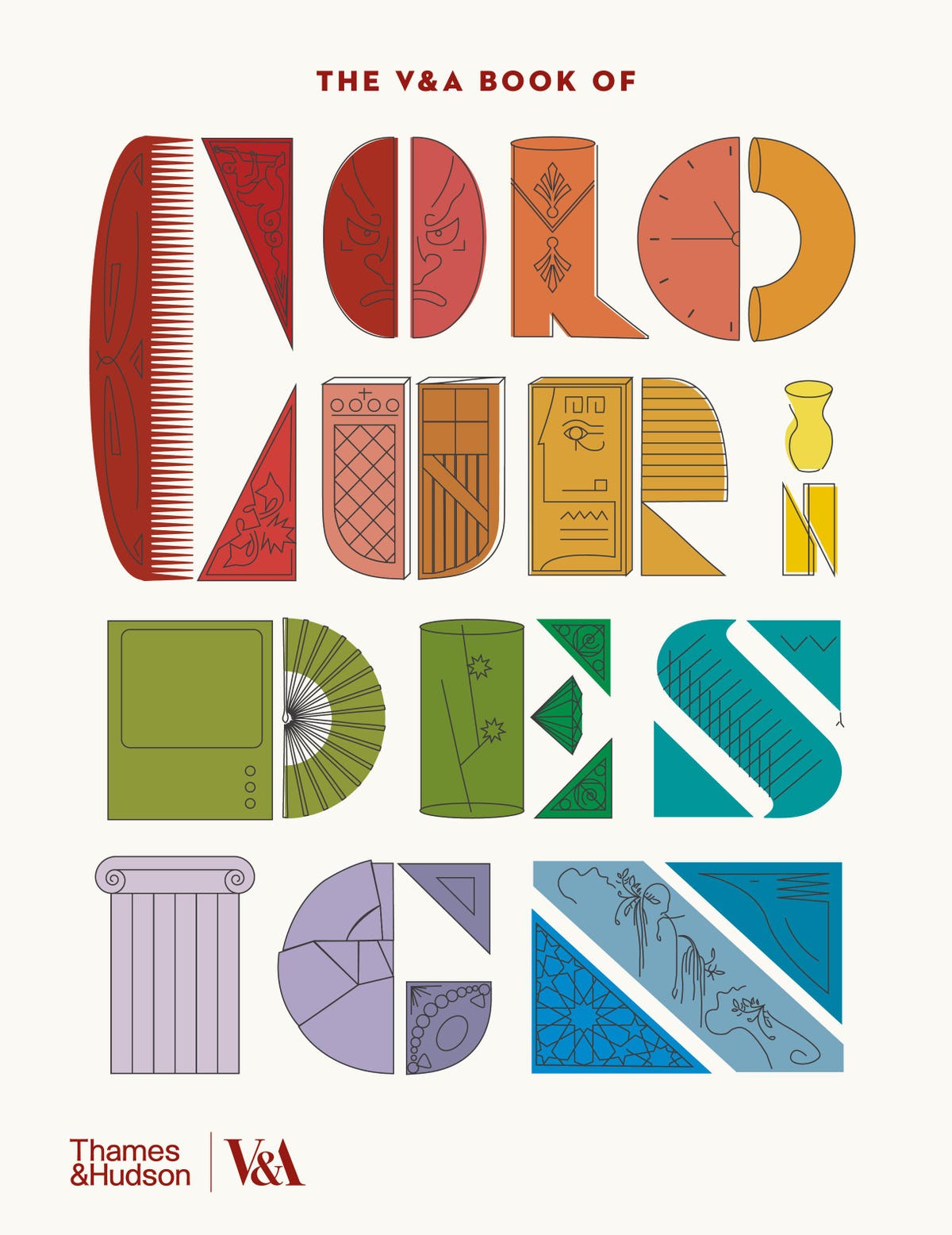 What’s your favourite colour? This question might ordinarily be viewed as a bland conversation starter, but your answer can be surprisingly revealing. Blue, for instance, might typically connotate peacefulness and calmness, with the ocean and sky the touchstones of the hue, but it is also a colour related to melancholy, with the phrase ‘feeling the blues’ summing up when we may feel down. Red, on the other hand, is typically seen as fiery and passionate, but it is also a shade to signify danger – it’s the colour of blood, of course, and of ‘stop’ signs all over the world.

Delving deeper into the subject is a new title – The V&A Book of Colour in Design (£30, Thames & Hudson) – by multi-award-winning graphic design studio Here Design and edited by Tim Travis, curator in the Word & Image Department at the Victoria & Albert Museum.

The importance of how we read and empathise colours is deeply ingrained in our psyches. In his intro, Tim refers to research by cognitive psychologist, Anna Franklin at the University of Sussex, which indicates that we can categorise colours long before we can speak – leading us to conclude, perhaps, that colour is our first ‘language’.

Separated into chapters to deep-dive into a whole gamut of different shades, the book examines each one, not only linking them to objects in the collections of the Victoria and Albert Museum in London, but revealing their wider cultural and global meanings.

For travellers, the book is like a visual dictionary – allowing new ways of seeing, referencing and embracing the world. The colour turquoise, for instance, has long been entwined with Egypt and Native Americans but its value started in Iran, where it was the starting point of the European turquoise trade, Pink, on the other hand, is celebrated in Japanese culture – particularly in the fleeting beauty of the cherry blossom and is associated with a number of gods and goddesses in Hinduism. Grey may be a trendy interior design colour for Millennials at the moment, but, for many, it is also been the very essence of London – ‘the Big Smoke’ – of the city’s fog and shadows, depicted evocatively by James Abbott McNeil Whistler and Charles Dickens. Is white even a colour? Its contradictions are also examined – with its significance revealed across many cultures.

Exclusively for Forbes, curator Tim Travis reveals more about the new book release and the significance of colour in design and travel.

‘Colour’ is such a broad subject matter, how overwhelming was it to curate the book?

It is a vast subject and there have been many books published about colour from many different perspectives, but our focus was specifically on colour in design, drawing on the V&A’s amazing collections of objects from every category of art, design and the performing arts. Along with the editors and designers, we were in the lucky position of being able to call on a great multi-disciplinary team of museum curators, archivists and librarians, who drew on their vast pool of knowledge to propose objects to include in the project, interpret the objects and tell their fascinating stories.

In terms of travel, would you say that there are colours that go hand-in-hand with particular countries or cultures?

Too many to list here, but some notable examples include red. It is an auspicious colour in China with connotations of good luck and wealth. The Russian word for red is similar to the word for beautiful, so red has associations with beauty and positive qualities (e.g. the Red Square in Moscow). Turquoise is traditionally popular in the Middle East, Tibet, and Latin America because of its association with the protective and healing properties ascribed to the precious stone that it is named after. Yellow and saffron have associations with divinity in India while green is symbolic of paradise in Islam, and many Muslim countries include the colour in the design of their national flags.

Were there any colour ‘discoveries’ that most surprised you when working on the book?

Lots of surprises: for example the gendering of the colours blue and pink for boys and girls respectively is a much more recent phenomenon than I had realised (20th century) and was largely driven by marketing. Colour perception in infants is a fascinating field and recent studies have shown that even before they can speak infants group colours in a similar way to adults – it had previously been thought that colour categories were much more conditioned by language.

What is your favourite colour and why?

Blue is the colour sacred to the Virgin Mary, ‘the sapphire’, as Dante wrote, who turns all of heaven blue. We have many beautiful examples of that connection in the V&A, sculptures, jewels, illuminated manuscripts, stained glass windows, textiles, mosaics, icons, and so on. They are some of my favourite objects.

What is the most important aspect – in your view – about our relationship with colour?

Colour and colour-coding is now used for everything from pharmaceuticals to transport systems, from electrical wiring to wayfinding, safety information, political affiliation, and sporting allegiance. It has become an international visual language disseminated by global trade and travel and the explosion of digital media. But at a very personal level it also entwines with the everyday experience of ordinary people, helping us to navigate our lives. It is no accident that many of life’s phases and milestones are symbolically associated with particular colours.

What will readers expect to gain from the book?

The book is a visual resource for practitioners, but it is also a fascinating journey with beautiful objects telling stories that weave in and out of styles, materials, cultures and periods. In can be read in any order or starting at any point. Perhaps start with your favourite colour, or least favourite, or chose any colour at random and see where it takes you.