You won’t find too many industries that have been hit as hard through the first 10 months of 2020 as cruise line stocks. Shares of Royal Caribbean (NYSE:RCL) have plummeted 59% this year through Thursday’s close, and it’s the lucky one. Rivals Carnival (NYSE:CCL)(NYSE:CUK) and Norwegian Cruise Line Holdings (NASDAQ:NCLH) have surrendered 73% to 74% of their values in 2020.

It’s Halloween, so let’s play trick or treat. I think two of these three stocks will bounce back, giving investors a nice treat. But I think the third player could be a trick. Let’s dive in. 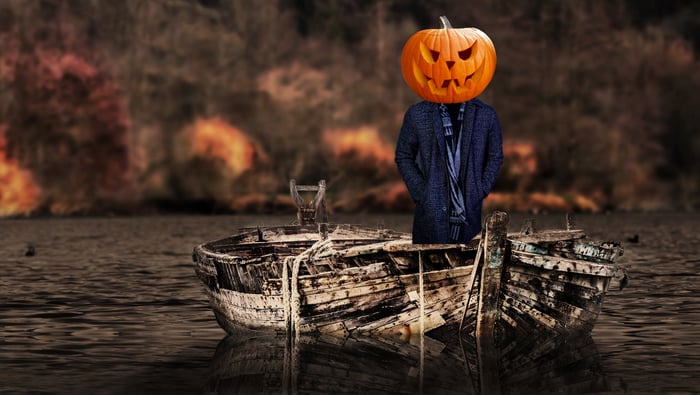 These are scary times for the cruise line industry. All three operators are hoping to get some of their ships sailing again by early December, but we’ve seen every previous restart date get nixed, so don’t believe the industry is resuming operations until it’s actually happening. Norwegian Cruise Line Holdings is the smallest of the three stocks, and if there’s a shakeout — something that’s entirely possible if the industry keeps facing a CDC ban or if consumer demand doesn’t bounce back — Norwegian Cruise Line should be the first casualty.

Norwegian hasn’t raised as much money as Carnival and Royal Caribbean — that in of itself is fine because it also has a far lower cash-burn rate, given its smaller operations. However, of the three cruise lines, it’s the one that passengers have the least faith in delivering on a future cruise.

The industry has taken a smart approach to dealing with passengers on canceled sailings. Customers can ask for refunds or opt to get even more than they paid in the form of future cruise credit. Giving customers the option to get 125% of their value on a sailing in 2021 or 2022 helps with the cruise lines’ current liquidity, and it also means less cabins to fill with new money later when demand may be slow to come around.

Based on the latest updates, here are the number of passengers on nixed sailings requesting cash refunds from each of the three major operators:

Only 40% of Norwegian Cruise Line customers are OK with letting the operator hold on to what they’ve already paid as a sweetened payment on a future cruise. Carnival and Royal Caribbean are holding up even better.

We could be several months away from cruises sailing again from the U.S., with the COVID-19 crisis spiking again across the planet. We’re at least two years away from a return to profitability for three players. Norwegian Cruise Line is shaping up to be the weakest link.

By process of elimination, Royal Caribbean and Carnival are naturally the treats here. There will be challenges, of course, but both of the leading cruise line operators have shored up their cash positions during the lull. Royal Caribbean had $3.7 billion in liquidity at the end of last month and raised another $1.15 billion in October. Carnival has even more booty in its treasure chest.

There are some good reasons why Royal Caribbean has held up relatively better than the competition, and despite being smaller in terms of fleet size and revenue than Carnival, it has actually overtaken its larger rival to command the largest market cap in the industry in 2020. Royal Caribbean has historically commanded the highest margins among the three publicly traded players, and it’s not a surprise that its passengers have been the least likely to ask for their money back when a sailing gets canceled.

Carnival deserves a spot as a value play now that it has a lower market cap — and only a marginally higher enterprise value — than smaller rival Royal Caribbean. With Carnival’s namesake brand gunning for the mainstream market, and its sister brands aiming higher, it’s going to survive the rough seas of 2020. Royal Caribbean and Carnival also used to pay out healthy dividends before the coronavirus crisis, and those payouts should come back in some form once the industry gets back on its sea legs.

The next few weeks may be rough. The next few months will be telling. The pandemic has been brutal, and the global recession will slow the turnaround. There’s a reason why they’re not all treats at this point, but the good candy will be waiting for those who are patient with the right investments. Happy Halloween.